SCAR STORY FROM THE DARK KNIGHT..

Be the first one to rate! Submit Review 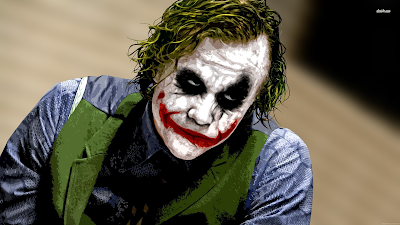 The Joker tells two different stories of how he got his scars in THE DARK KNIGHT. Why?

The first version is told to Gambol, the crime boss:

Wanna know how I got these scars? My father was a drinker and a fiend. And one night he goes off crazier than usual. Mommy gets the kitchen knife to defend herself. He doesn’t like that. Not. One. Bit. So – me watching – he takes the knife to her, laughing while he does it! Turns to me, and he says, “Why so serious, son?” Comes at me with the knife… “Why so serious?” He sticks the blade in my mouth… “Let’s put a smile on that face!” And… why so serious?

The second version is told to Rachel:

Oh, you look nervous. Is it the scars? Wanna know how I got ’em? C’mere, look at me. So, I had a wife, who was beautiful…like you, who tells me I worry too much, who tells me I oughta smile more, who gambles and gets in deep with the sharks… Hey. One day they carve her face. And we got no money for surgeries. She can’t take it. I just want to see her smile again. Hmm? I just wanted to let her know that I don’t care about the scars. So, I stick a razor in my mouth and do this… to myself. And you know what? She can’t stand the sight of me! She leaves! Now I see the funny side. Now, I’m always smiling!

Why does the Joker tell two different, contradicting stories?

The most superficial interpretation is: the Joker is insane. He is so mentally ill he is incapable of being honest or consistent even with himself. So, the stories reflect Joker’s mental turmoil.

Many audience members will not advance past this interpretation, and that’s fine.

A related second answer would be that the Joker is a pathological liar. Throughout THE DARK KNIGHT the Joker manipulates his enemies through lies, trickery, disguises, and traps:

The bank robbery and massive double-cross.

Pretending to be dead to get inside Gambol’s headquarters.

“I just want my phone call” and the cellphone bomb.

The Joker tells Batman the wrong location for Harvey and Rachel.

It is heavily implied that the Joker is pulling a similar trick on the two ferries.

Joker dresses as a guardsman to infiltrate the parade and shoot at the Mayor, and he sets up the sniper trap for Batman.

He dresses as a nurse to infiltrate the hospital.

He sends assassins to Judge Surillo who pretend to be her bodyguards.

The two scar stories, then, can be seen as a continuation of the Joker’s pattern of terrifying deceit and unpredictability.

Again, this interpretation is valid, and many viewers of THE DARK KNIGHT will not delve any deeper than this.

However, a third interpretation is the Joker is creating a self-conscious performance. The Joker always introduces his story with “Wanna know how I got these scars?” He is asking the question that everyone must be thinking when they look at his disfigured face, but nobody actually dares to ask. He asks it for them. It’s important that he tells the story of an abusive father to Gambol, and the story of a neglectful wife when speaking to Rachel; he is clearly tailoring his story to his audience.

If we look closer, two themes unite the Joker’s stories. In both stories, the Joker is the victim of physical or emotional abuse. The second theme is humor (“Why so serious” / “Let’s put a smile on that face” / “Now I’m always smiling”). Humor is associated with insanity: people know that laughing when nothing is funny, or laughing uncontrollably, are symptoms of a madman.

The Joker is thus “reciting” a “myth” that people create in their own minds when they meet the Joker: the Joker must have been a victim of physical or emotional abuse, and the scars made him so detestably ugly that he went insane to cope.

This is a very unoriginal, vanilla origin story for a villain. BUT, in telling different variations on this same stereotypical story, the Joker is clearly winking at the audience. “So-and-so is what people THINK happened to me.”

In reality, neither story is true. The Joker is not actually a laughing madman. He is often sarcastic and he has a sharp sense of humor (for example, he is clearly aware of how grotesque his nurse disguise is). But in many scenes, the Joker is serious and sober. Remember when the Joker escapes in the cop car with his head hanging out the window? Jack Nicholson and Mark Hamill would be laughing maniacally in this scene. Heath Ledger’s Joker is silent.

The Joker does laugh several times in THE DARK KNIGHT, but it is a performance, like his clown makeup. The Joker laughs when he wants other people to think he is insane. The two clearest examples of this are when he is making his televised terrorist threat (interrogating the wanna-be Batman) and in his final conversation with Batman (while hanging upside down). Batman may be fooled, thinking Joker will “rot in a padded cell forever,” but Nolan’s Joker isn’t insane. He rarely exhibits out-of-control, irrational, or impulsive behavior.

Just to drive this point home, the Joker even utters a sarcastic fake-laugh when he meets the mob (“Ha ha. Hee. Ho. And I thought MY jokes were bad.”), clearly emphasizing how in-control he is. It is evident that his laugh while torturing the wanna-be Batman is just as much a performance.

The Joker uses storytelling to paint an image of himself as a madman, but he is really a mastermind.

In typical Nolan style, we can go even one level deeper.

A final interpretation of the Joker’s stories is that the Joker is making a powerful comment on the DIFFERENCE between Joker and Batman.

If we look at Batman, his origin story is central. It is not just an explanation for his powers, like Peter Parker’s radioactive spider or Superman’s planet Krypton. Batman’s origin story is his MOTIVATION for becoming Batman. Batman is not the result of a scientific experiment gone wrong, like the Hulk; Bruce Wayne made a conscious CHOICE to become Batman after his parents died. Batman’s origin story is also the source of a painful tension in Bruce’s character: his conflicting desires for revenge (violence and vigilantism) versus justice (law and order).

In short: Batman is defined by Bruce Wayne’s past.

One of the themes of THE DARK KNIGHT is the contrast between the Batman’s “one rule” (no killing) and the Joker’s “no rules” attitude. A few lines in the film draw attention to this. Crime boss Maroni tells Batman that nobody will help him find the Joker: “You got rules. The Joker, he’s got no rules. No one’s gonna cross him to you.” The Joker tells Batman: “You have all these rules and you think they’ll save you…. The only sensible way to live in this world is without rules.”

By telling conflicting stories of his origin, Joker draws a powerful contrast with Batman. Batman is defined (and limited) by his past. The Joker is free to invent his own past. Since he has no past, he has no motivation. As he tells Harvey: “Do I really look like a guy with a plan? … I just DO things. The Mob has plans. The cops have plans. Gordon’s got plans. You know, they’re schemers. Schemers trying to control their little worlds. I’m not a schemer. I try to show the schemers how pathetic their attempts to control things really are.”

In short, Joker is defined by his LACK OF a past.

Batman is scarred (psychologically) by his parents’ death and he never forgets it. The Joker doesn’t even bother to remember why he has scars.

The Joker uses people’s pasts to manipulate them several times in THE DARK KNIGHT. At the most superficial level, Anna Ramirez is corrupted thanks to her mother’s hospital bills. Going a little deeper, the Joker corrupts Harvey Dent by appealing to his lifelong appreciation for fairness (represented by the coin).

The person who has the most vulnerable past is Batman himself. The Joker is able to get the better of Batman several times because of this. First, the Joker forces Batman to crash his bike rather than violate his one rule. Then, the Joker is immune to Batman’s beatings and intimidation because he knows Batman can’t kill him. Ultimately, Joker tricks Batman into letting Rachel die by sneakily appealing to his secret love for her.

The Joker is a man without a past, and that’s what makes him a terrifying villain.

It also makes THE DARK KNIGHT a complex, ambiguous, deep, and fascinating movie.

Not everyone analyzes movies to death, but classic movies grab our imaginations because they are open to interpretation, discussion and analysis. That’s what makes THE DARK KNIGHT a classic.

Rate us and Write a Review

Your request has been submitted successfully.

We use cookies to ensure that we give you the best experience on our website. If you continue to use this site we will assume that you are happy with it.Ok